At a signing ceremony in Cambridge on Friday 18 May an agreement was signed between CONICYT Chile and the Cambridge Overseas Trust to co-fund Chilean students working towards PhDs in Cambridge.

The Director of CONICYT, Professor José Miguel Aguilera, said that CONICYT aimed to increase the number of leading researchers working in Chile, and regarded postgraduate studies at the University of Cambridge as an effective way of achieving this goal.  Professor John Rallison, in his roles as both Pro-Vice-Chancellor for Education in the University and a Trustee of the Cambridge Overseas Trust, welcomed this initiative, which complements the many existing research links between Chile and Cambridge.

Michael O'Sullivan, Director of the Trust, thanked two people who had been instrumental in establishing the relationship between CONICYT and the Trust - Prince Hassan Bin Talal of Jordan and Congressman Patricio Hales in Chile.  He looked forward to welcoming the new Chilean scholars to Cambridge in October 2013.

Professor Aguilera was accompanied in his visit to Cambridge by HE Mr Thomas Müller Sproat (Chilean Ambassador to the UK), Dr Denise Saint-Jean (Director of the Advanced Human Capital Program at CONICYT), and Mr Sebastian Izquierdo (from the Chilean Ministry of Education).  The event was also attended by a number of postgraduate students and post-doctoral researchers who are currently working in Cambridge.

The scholarship scheme will offer up to 15 full-cost awards to PhD students from Chile each year. 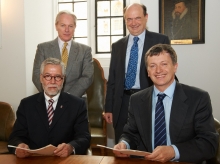