The University of Central Asia was founded in 2000, and aims to promote the social and economic development of Central Asia, particularly its mountain societies.  It is establishing three campuses, in Tajikistan, the Kyrgyz Republic and Kazakhstan.  The International Treaty and Charter that established this secular and private university was signed jointly by the Presidents of those three countries, and the founder His Highness the Aga Khan.

UCA brings with it the commitment and partnership of the broader Aga Khan Development Network, offering an internationally recognised standard of higher education in Central Asia.

In addition to providing high-level education, UCA enables the different peoples of the region to preserve and draw upon their rich cultural traditions and heritages as assets for the future. It seeks to contribute leadership, ideas, and innovations to the transitioning economies and communities of the region through modern educational and vigorous research programmes that produce knowledgeable, skilled and creative graduates.

UCA and the Cambridge Trust work together to offer the University of Central Asia Cambridge Scholarship, for postgraduate students from the UCA region whose studies reflect the current focus subjects of the UCA. 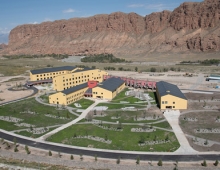