At an event in Bangkok this month the Cambridge Thai Foundation renewed its support for Thai students on degree courses at the University of Cambridge.

From 2013 the Foundation and the Cambridge Overseas Trust will continue to give joint support to successful applicants from Thailand undertaking degrees in any subject at the University of Cambridge, and at any level of study – undergraduate (BA or BA affiliated) or postgraduate (either a one-year taught course leading to an MPhil, LLM or similar, or a three-year research course leading to a PhD).

The Trust’s Director, Mr Michael O’Sullivan, attended the signing ceremony and was joined by Mr Anand Panyarachun, former Prime Minister of Thailand, who signed the Memorandum of Understanding on behalf of the Foundation.

The agreement reflects a long-standing informal understanding between the Cambridge Thai Foundation and the Cambridge Overseas Trust, by which numerous Thai students have received scholarships towards the costs of their degree courses in Cambridge. 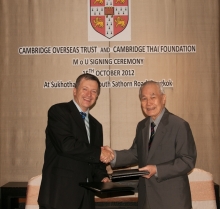