The Saha Institute of Nuclear Physics and Cambridge's Cavendish Laboratory are joining forces with the Cambridge Commonwealth Trust to fund outstanding Indian students in any field of Physics.

SINP in Kolkata was founded in 1950 by Professor Meghnad Saha as a part of the University of Calcutta, and since then has grown to include research into many fields of Physics, Chemistry and Biological Sciences.  The Cavendish Laboratory in Cambridge has had an extraordinary history of discovery and innovation in Physics since its opening in 1874, and no fewer than twenty nine members of the department have won Nobel prizes.  The Laboratory now houses research groups in many and diverse fields of Physics.

In a new scholarship agreement, co-funded by the Cambridge Commonwealth Trust, members of SINP will receive full-cost scholarships to undertake a PhD in Cambridge, whilst maintaining their academic links with SINP. 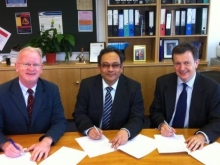