Rachael Shaw, a New Zealand scholar at the Department of Psychology's Comparative Cognition Lab, has co-authored a paper with her supervisor that investigates patterns of food hiding and food pilfering by crows (corvids).  As she summarizes:

"Members of the crow family provide some of the best evidence for intelligence in non-primate species. Experiments utilising natural caching and pilfering behaviour (hiding food for later consumption and stealing food hidden by others) allow insight into corvid social cognition, memory and forethought. However, most studies of corvid cognition have focussed on semi-social species such as the scrub-jay and the raven. Data from species that differ in their socio-ecology is needed to better understand the role that social factors play in the development of these abilities. Furthermore, although behavioural flexibility is considered as a measure of intelligence in non-human species, previous studies have investigated the tactics used by individuals either when caching or when pilfering, rather than examining both roles and the interplay between them.

Our study, therefore, investigated whether territorial Eurasian jays could flexibly vary their cache protection and pilfering behaviour in response to the social context. To test this, jays competed with dominant individuals in some trials and subordinate individuals in others. The jays flexibly switched behavioural tactics between the two social contexts. When dominant to the competitor, jays cached prolifically, moved caches frequently and aggressively displaced their competitors to steal caches directly. In contrast, when subordinate, the same jays were secretive when caching and delayed approaching their partner’s caches to pilfer until the partner was at a distance. This flexible response to social context in a territorial species may be based on cognitive strategies, suggesting that factors other than sociality are important in the evolution of complex social cognition."

The full paper can be read online in Animal Behaviour.

Rachael is supported in her PhD studies by a Cambridge-Rutherford Memorial Scholarship. 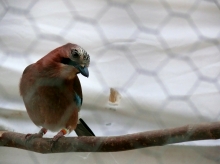