In a traditional ceremony dating back centuries, Sir Gregory knocked at the College’s Great Gate carrying Letters Patent from Her Majesty The Queen.  Following an address from the Head Porter, Mr Peter Windmill, the gate was closed in his face and the Letters Patent were carried into the Ante Chapel to be presented to the Vice-Master and assembled Fellows.   Once the Vice-Master had inspected the letters and satisfied himself of their correctness, he was joined by more than 150 Fellows in full academic dress who processed across Great Court to welcome the new Master into the College.

Sir Gregory, who graduated from Trinity College in 1973, has been a Senior Research Fellow of the College since 1991 and is a pioneer of antibody engineering.  He was a founder of Cambridge Antibody Technology, one of the early commercial biotech companies involved in this field, and is a member of the Medical Research Council’s Laboratory of Molecular Biology, having co-founded the MRC Centre for Protein Engineering.

Sir Gregory has won numerous scientific awards, including the Royal Medal of the Royal Society which he received last year, and succeeds Lord Rees of Ludlow who retired from the post of Master of Trinity College on 30 June this year. 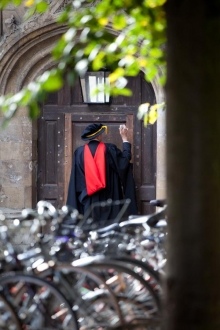