Michael O'Sullivan, the Trusts' Director, was invited to be the guest speaker at the annual Boat Race Dinner held by the Vancouver Oxford & Cambridge Society.

The gala event, held in Green College at the University of British Columbia, took place on Saturday 21 April.  The event was preceded by a viewing of this year's eventful Boat Race, which took place on 7 April.

Michael gave the toast to the two Universities, and then spoke about the changes that have taken place within Cambridge over recent years, and its work beyond the walls of the University.

The Vancouver Society is one of the oldest alumni organisations of the University of Cambridge, having been in existence for 81 years, and it has about 1,100 members. 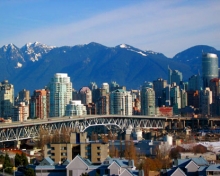