Scholar meets Her Majesty The Queen

Felicia Ng had the privilege of meeting Her Majesty The Queen at a reception in Buckingham Palace earlier this month.  She was among 350 guests from all over the world invited to the Reception for Youth, Education and the Commonwealth hosted by Her Majesty.

Felicia is a recipient of the Yousef Jameel Scholarship, and is a third year PhD student in Haematology and a member of Wolfson College.  Working under the supervision of Professor Berthold Gӧttgens, she studies the development of blood stem cells and in particular the mathematical modelling aspect of gene regulation.

Since her arrival in Cambridge Felicia has been an active member of the Cambridge University Commonwealth Society. In her first year she was Treasurer for the Society, and was subsequently elected as Chair in January 2013. A Malaysian by birth who grew up in Kuala Lumpur, her Commonwealth connections stretch back to her College days when she served as a St. John's Ambulance first aid volunteer at the Commonwealth Games held in her home city.

Speaking about her visit to the Palace, Felicia said "I was honoured to meet Her Majesty The Queen in person and was delighted to be given the opportunity to visit Buckingham Palace as a guest rather than as a tourist!". 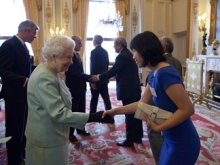