The Islamic Develoment Bank and the Cambridge Trust have been supporting research students in Cambridge since 2009, but this year saw the first IDB Scholars' Scientific Symposium, held at the University's Department of Engineering.

The event brought together IDB scholars from Aberdeen, Birmingham, Edinburgh, Liverpool, London, Manchester, Norwich, Oxford and Sheffield, and featured presentations from many of the students on the work they are carrying out in many scientific fields.

Also contributing to the day were Dr Malek Shah, the Head of the IDB scholarship division, and Shaharuq Huq, the IDB officer who has assisted all the IDB scholars worldwide.

The symposium was fully organized by a team of students, who ended the day by handing over the reins to next year's Scholars' committee. 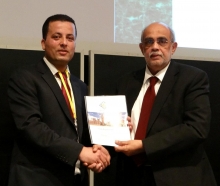