Earlier this month, Trust scholars had the opportunity to hear Mark de Rond, a Reader in Strategy and Organisation at the Judge Business School in Cambridge, give the second in a series of student lectures entitled “The Good, the Bad, and the Damned: Leading Teams of Clever People”.

Mark studies teams of high performers by living with them full-time.  In 2011, he joined a team of surgeons in Camp Bastion, Afghanistan, to understand how they collaborate, organize and think about their work.  As part of his lecture, Mark included footage of the surgeons at work in the camp.

As an extension of his research into teams performing in difficult environments, Mark and a Cambridge colleague completed the first unsupported row of the entire length of the Amazon, securing a Guinness World Record in the process!

The event held in the Howard Theatre at Downing College attracted more than a hundred Trust scholars who had the opportunity to pose questions to Mark following his talk. 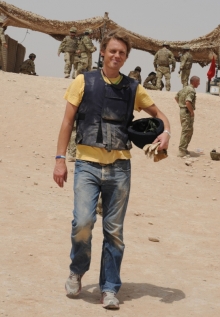