Much has been written in the past week, since his death on 9 October, about Lord Howe and his life achievements: highly competent lawyer and QC; politician; Foreign Secretary; Chancellor of the Exchequer; Deputy Prime Minister; one of the longest-serving Conservative cabinet members of modern times.

But in addition to these many substantial achievements, all of which are well-documented (see related links), Lord Howe quietly held a number of non-executive directorships and advisory posts, including with the Cambridge Commonwealth, European & International Trust.

Himself a Cambridge alumnus, being admitted to study Law at Trinity Hall in 1948, where he coupled his studies with an active involvement in politics and was Chair of the University Conservative Association, Lord Howe’s support of the Trust spanned over twenty years.

He was appointed to the role of Trustee of the Board back in November 1988, became Emeritus Trustee thereafter, and in more recent years was a Founder Member of the Trust’s International Advisory Council.

As well as being present at many board meetings, Lord Howe attended the Trust’s annual reception for the scholars it supports (between 1,100 and 1,400 in residence each year from 85 countries across the world) on several occasions, and particularly enjoyed the opportunity to chat with young, outstanding, students undertaking their studies here in Cambridge, as he once did. 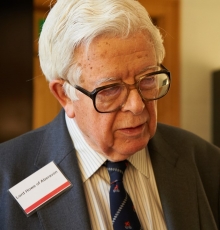