Rosemary Ostfeld is no stranger to coxing on the Thames, having coxed the Cambridge reserve crew, Goldie, in the men's Boat Race last year.

But on Saturday 11 April an even larger audience will see her cox in the 2015 Newton Women's Boat Race, the first of these annual races to be held on the same course as the men's race, on the Thames in London.

Rosemary is currently studying for a PhD in Land Economy, with support from the Cambridge Trust.  A member of Hughes Hall, her research interests are in renewable energy, water resources, palm oil and eco certification.

A few facts about the Boat Race:

You can read Rosemary's contribution to a Boat Race coxes' Q&A session, published this week in The Daily Telegraph. 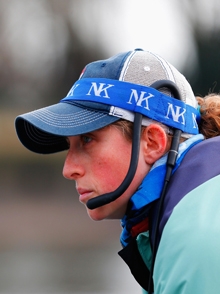