Trust scholars on the radio

Two of the Trust’s scholars recently featured in a documentary exploring what Britain is like through African eyes, broadcast by BBC Radio 4.

Bob Njoroge Muhia from Nairobi in Kenya is undertaking a Masters degree in Architecture and Environmental Design, having been awarded a Cambridge Trust Scholarship.

Margret Mauricia Nambatya from Uganda is also supported by a Cambridge Trust Scholarship and is studying Engineering for Sustainable Development.

Over 35,000 African students studied at British universities last year – part of a growing number of international students coming to the UK.  Bola Mosuro, presenter of Newsday, the BBC World Service’s international news and current affairs programme, charted the progress of four students from Africa; Bob and Margret, and two students undertaking degree courses at the University of Edinburgh.

Bola was keen to discover: what would they like to take back with them from the British way of life? And what can we learn from Africa?  Through their moving, insightful and humorous observations she explores what Britain is like from the perspective of an African student.

You can listen to the documentary on iPlayer here. 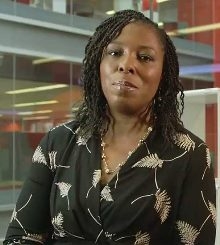