On Saturday 14 October, the Trust hosted its annual Welcome Event for all those newly-arrived students it supports with its global partners.

The Trust made 482 awards this year, and more than 300 of those scholars attended, representing 71 countries, from Argentina to Zambia.  With the support of a wide range of scholarships, these students are embarking on degree courses at the University of Cambridge in a wide range of subjects, from Advanced Computer Science and Applied Mathematics to World History and Zoology.

Helen Pennant, the Trust’s Director, welcomed the students and congratulated them on having been successful in winning scholarships.  The Trust, the largest provider of funding for students at the University, receives in the region of 4,000 applications annually.

The new students were fortunate enough to be addressed by the University’s recently-installed Vice-Chancellor, Professor Stephen Toope; he is the 346th person to be elected to the post, and was formally admitted on 2 October at a ceremony held in the University’s Senate House.

Himself a Cambridge alumnus having attended Trinity College to study for a PhD in Law with the support of a Commonwealth Scholarship, the Vice-Chancellor spoke fondly of his time here, and of his recent admission, saying “when I was formally admitted as Vice-Chancellor last week, I said that Cambridge is not an excellent university because it is an ancient university, but it is an ancient university because of its continued excellence … you are now part of that striving for excellence, and of the University’s 808 year history … congratulations!”

In addition to meeting other Trust scholarship-holders, students were able to meet and chat with Trust staff and Trustees.

A selection of images of the event can be viewed on the Trust’s Flickr pages. 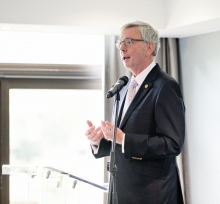