Philip read for an MPhil in Polar Studies at Darwin College in 1996-97 and received a B.B. Roberts Fund award from the Scott Polar Research Institute to assist a period of study at the US State Department Archive in Washington DC  as part of his thesis research.

During the lunch, Philip talked to scholars about his work for Cambridge Australia Scholarships which results from his strong bond with Cambridge forged over 20 years ago. He also described how his career after Cambridge had taken him from the Daily Mirror newspaper in London to sports communication roles in cricket, the Olympics and rugby union.

In attendance at the lunch was Philip’s supervisor, Robert Headland, an associate of the Scott Polar Research Institute, who is an expert on the island of South Georgia, being present on the island in 1982 during the invasion by Argentine forces, an action that led to the Falklands Conflict. 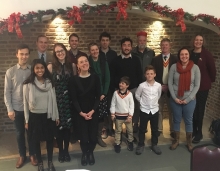