HRH Prince Philip, The Duke of Edinburgh, Chancellor of the University 1976-2011

Helen Pennant, Director of the Cambridge Trust, said “we at the Trust were deeply saddened to learn of the death of His Royal Highness Prince Philip, The Duke of Edinburgh.  As the Vice-Chancellor, Professor Stephen Toope, said today “Prince Philip’s strong and deep relationship with Cambridge went back many decades, and his enthusiastic support of the University’s work, both as its Chancellor for 35 years and at other times in a personal capacity, was deeply appreciated”.”

HRH Prince Philip inspired a programme of scholarships named for him to be offered to talented undergraduate students from Hong Kong.  The prestigious 'Prince Philip Scholarships', established under the leadership of Sir David Li and managed by the Friends of Cambridge University in Hong Kong in partnership with the Cambridge Trust, have supported several generations of young people from Hong Kong to study at the University of Cambridge. 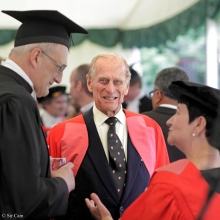