At an event in Hong Kong last week the Sun Hung Kai Properties-Kwoks’ Foundation renewed its support for Chinese students on postgraduate courses at the University of Cambridge.

In 2012-13 the Foundation and the Cambridge Overseas Trust will again give joint support to twelve students from mainland China who are working towards Masters or PhD degrees in any subject in Cambridge.

Amy Kwok, Executive Director of the Foundation, said “We follow our late father Kwok Tak Seng’s belief in training talented people for the nation.  I hope the students will value this great opportunity to learn and contribute to the nation.  I also offer my special thanks to the University of Cambridge for working with us to help more mainland students further their studies abroad.”

The Foundation also supports the China Executive Leadership Programme for senior China government officials and an exchange programme for Cambridge students to study in China, and has so far contributed more than HK$20 million in total to the leadership programme and scholarships. 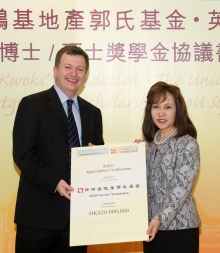