Aaron received his PhD, MPhil, and Diploma from the University of Cambridge and was a visiting scholar at the University of California Berkeley. He received the Top First in Theology for Part I examinations at Cambridge, and earned his BA from Bowdoin College, from which he graduated with highest thesis honors.

Aaron says about his first experience of Cambridge “When I first arrived in Cambridge, fresh off a red-eye flight in my first trip to England, the porter at my College gave me a dubious look.  "Rosen," he muttered grimly, "no Rosen on the list."  I meekly enquired if he wouldn't mind checking again, since I had, after all, made a journey of about 20 hours to get there.  He did, and gave what I would come to realize passes for an apology in the gruff lexicon unique to Cantabrigian Porters.  Despite my awkward start, I soon found Cambridge to be the kind of intellectual and social home I only dimly imagined growing up in rural America.  Oddly enough, reading was a genuine pastime.  Playing tennis wasn't just for 'sissies'.  People knew what irony was.  Smoking jackets were fashionable.  Being an aesthete was a compliment.  It is hard now to imagine what my life would have been like without Cambridge, where I would go on to receive a Diploma, MPhil, and PhD.  It was there that I first felt genuinely at ease in every way.  It was so supportive and nurturing there was even a brief period when I believed I could dance.”

Aaron has written widely on religion and the arts for various publications, and is the author of Imagining Jewish Art (Legenda, 2009).  He is currently working on a new book which will examine works by Jewish, Christian and Muslim artists in search of new trajectories for inter-religious dialogue. He taught previously at Columbia, Oxford and Yale Universities, and continues to teach at Kings College London.  Aaron has lectured at universities, religious institutions and festivals across the United States & UK as well as Russia and Australia. 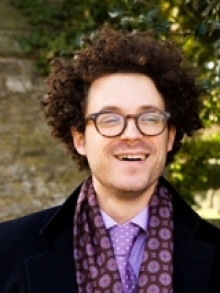