Degree: MPhil in Environmental Policy, PhD in Agricultural and Resource Economics (both in Land Economy Department)

Prior to commencing studies in Cambridge Adewale worked across agricultural, pharmaceutical and oil and gas sectors.  He founded a youth development group in Nigeria which has championed a skills exchange programme since 2002 with more than 200 beneficiaries.  As a young entrepreneur, Adewale started an organic fertiliser production company in 2003 with an interest in helping to reduce unemployment in Nigeria.

Adewale completed his MPhil and PhD degrees between 2006 and 2011. His doctoral research was in the area of agricultural and resource economics focusing on the livelihood impacts of zoonosis in Africa. The study drew lessons for adaptation and resilience building in a world that is constantly changing.

While studying in Cambridge, Adewale saw Cambridge as an historic place that is not only beautiful but very inspiring.  "Passing by Trinity College with the thought of Isaac Newton and Amartya Sen in mind refreshes one’s dream", he says.

Following completion of his studies in Cambridge, Adewale joined the International Food Policy Research Institute, a research-based development organisation, as a postdoctoral research fellow. His current research focuses on the economics of biofortification as a strategy for reducing micronutrient deficiencies or hidden hunger in countries across Africa, Asia and Latin America.

When asked about Cambridge, Adewale said, "A Cambridge degree has contributed immensely to my career and I am very grateful to the Cambridge Commonwealth Trust." 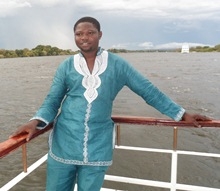