Alan Hoi-Lun KOO graduated from Hong Kong Baptist University with first-class honours in Chinese Medicine & Biomedical Science.  In 2008, he was enlisted by Hong Kong Science and Technology Parks as a scholar to visit the Øresund Science Region in Denmark and to analyse the feasibility of applying the Scandinavian Innovation Model to Hong Kong.

Alan was awarded a British Chevening Scholarship by the Cambridge Overseas Trust to study a postgraduate degree in Bioscience Enterprise at the University of Cambridge.  He shared his overseas learning experience regularly in his education column on Wenweipo, a Chinese newspaper in mainland China and Hong Kong.

Soon after Alan graduated from Cambridge, he returned to Hong Kong and joined Pfizer where he took charge of medical affairs and government lobbying of a paediatric vaccine in Hong Kong and Macau. Later he was promoted to Associate Consultant responsible for business operations and new business planning. After he left Pfizer, he founded his own clinic and decided to name it “River Cam Chinese Medicine & Acupuncture Clinic” so that he will not forget his wonderful punting experience along River Cam in Cambridge with his fiancée. To date, he has founded two clinics on the Hong Kong Island providing a quality and evidence-based traditional Chinese medicine and acupuncture service to the community. And the fast-growing clinic chain aims to expand further in the next few years in the territory.

Besides daily clinical practices, Alan is also passionate in fostering the development of Chinese medicine, an ancient medical system that is still widely used by the Chinese community worldwide. As a member of the Good Practice in Traditional Chinese Medicine, Alan co-authored an article “Future development of global regulations of Chinese herbal products” on the Journal of Ethnopharmacology with experts in Chinese medicine worldwide including the Food and Drug Administration (FDA) in the US. As an appointed Executive Committee Member of the Modernized Chinese Medicine International Association (MCMIA), Alan was invited by the Hong Kong Trade Development Council (HKTDC) to participate in the shooting of a Chinese medicine promotional video and was featured in Hong Kong Trader International Edition, an award-winning trade publication. Recently, a world renowned chicken essence company also engaged Alan in shooting an infomercial that was widely broadcast in Hong Kong.

Alan is currently the President of the British Chevening Scholars (Hong Kong) Association and an active member of the Cambridge Judge Business School Alumni Club in Hong Kong. 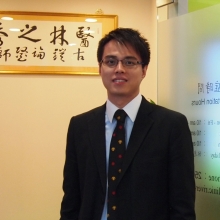