Andrew studied in Cambridge from 2009 to 2012 where he earned a PhD in Physics having been awarded a St. Edmund’s Duke of Edinburgh Scholarship by the Cambridge Commonwealth Trust.  Before coming to Cambridge, he obtained a BD and a B Phil. from Pontifical Urban University, Rome, as well as a BA from the University of Uyo, Nigeria.  Following his ordination as a Catholic priest in 2003, he taught Physics, Chemistry and Mathematics in a secondary school in Nigeria, and wrote a 3-volume physics textbook for secondary schools, which is still in use.  His boss, Archbishop Joseph Ukpo, decided to nurture Andrew’s outstanding aptitude for the natural sciences, philosophy and theology.  This decision led to Andrew’s further studies in physics.  In 2008, he gained a Master of Science degree in Physics from Creighton University, Nebraska, USA, before starting his PhD studies at the Cavendish Laboratory in the Department of Physics at the University of Cambridge.


During his time in Cambridge, Andrew was actively involved in student life through daily Eucharistic celebration in the College chapel at St Edmund’s.  He played football for the College team and was an adviser to the Cambridge University Nigeria Society.


In his free time, Andrew played chess, the keyboard and football.  Writing about Cambridge, Andrew says, “Cambridge is the best place where I have lived out my personal motto, namely, from the oratory to the laboratory and back again.  Amazing colleagues, inspiring Professors, awesome facilities and cutting-edge laboratory equipment, in synergy, made my time in Cambridge the most sublime period of my life so far.  I am grateful to the Cambridge Commonwealth Trust for the financial support that made it possible.”


Andrew is working towards building model Research Laboratories across sub-Saharan Africa,  through a non-profit, non-governmental organization he co-founded ‘the Science and Technology Network for Human Advancement’, SATNHA.  “For me,” he adds, “the rest of my life is an opportunity to give back”. 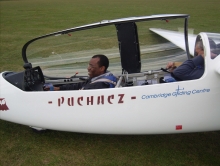