Ani completed an MPhil in Engineering for Sustainable Development at the University of Cambridge in 2012.  His research was part of the BP Foreseer project, under the supervision of Dr Julian Allwood, focussing on resource productivity in Australia.  The study included whole-system analyses of land, water, and energy which resulted in the production of three Sankey diagrams that describe Australia's resource footprint.

Previously, Ani attended the University of New South Wales and gained degrees in Mechanical Engineering and Commerce.  Since leaving Cambridge, Ani has joined McKinsey & Company in Sydney as a Business Analyst.

Regarding his time at Cambridge, Ani said "attending Cambridge was absolutely a dream come true.  Cambridge well and truly exceeded any hopes and expectations I had before my arrival. It was a life-changing experience, in an amazing place with even more amazing people." 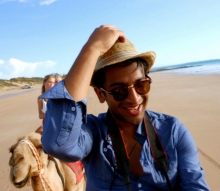