Current position: PhD student at the London School of Economics and Political Science

Apurv is a Social Psychologist interested in advancing theories and applying them to real world problems and is interested in the development of knowledge systems in societies and how these knowledge systems are used by people.  More specifically, Apurv works around the social psychology and community dynamics of poverty with an aim of improving the social policies on poverty.

Apurv read for an MPhil in Social and Developmental Psychology at the University of Cambridge where he examined the representations of poverty in the British print media.  He graduated from Cambridge and received a distinction on every essay and dissertation, along with an overall distinction on the degree.

Before coming to Cambridge, Apurv received his BA (with honours) and MA in Psychology at the University of Delhi, where he also worked for a year as a University Teaching Assistant in the Department of Psychology.  Coming to Cambridge for his MPhil was, in many ways, a turning point in Apurv’s life.  He says ‘Cambridge is a place where the best minds in the world are and that reflects in every aspect of University life - from conversations over a pint at the Eagle, to the discussion groups in the course.  I am immensely thankful to the Cambridge Commonwealth Trust for their support, without their generous scholarship, I would not have been a part of this rich heritage spanning over 8 centuries of academic excellence.  After Cambridge, I have moved to the London School of Economics and Political Science (LSE) to undertake a PhD on poverty policies in India.  As London is just an hour from Cambridge, I still maintain a very good connection with my colleagues at the University and often drop in for fish and chips and a pint at the Eagle!” 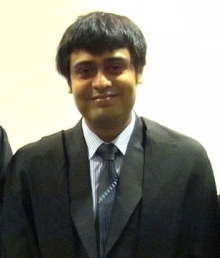