Before coming to Cambridge, Artem graduated with distinction from the Faculty of Law of the Taras Shevchenko Kyiv National University.

In Cambridge, he became a member of Darwin College and earned a Master’s Degree in Law from the Faculty of Law, where he studied international and EU law.

Being an active member of the Cambridge University Law Society and contributing to the Cambridge Pro Bono Project, he co-authored a research memorandum in response to a request from the Inter-American Court of Human Rights. The memorandum dealt with a case that was active before the Court and involved researching laws and jurisprudence from numerous domestic, regional and international jurisdictions around the world.

In addition to his academic activities, during his spare time in Cambridge, Artem contributed to the activities of the Wilberforce Society and the Cambridge University Ukrainian Society. He was awarded a Global Summer Scholarship from the University of Cambridge to study public policy, communications, and culture at Peking University in the framework of the Global Summer Program.

After his return to Ukraine, wishing to contribute to advancing his country’s civil society, Artem co-founded in 2013 the Cambridge Society of Ukraine (CSU). Together with his friends from the CSU and the Oxford Society of Ukraine, he then co-founded in 2015 the Bohdan Solchanyk Travel Grant, which supports talented Ukrainian researchers in their efforts to present the results of their work at academic conferences in Cambridge and Oxford.

In 2014, together with leaders of other alumni societies, Artem co-founded the Professional Government Association of Ukraine (PGA), bringing together over 25 Ukraine-based alumni associations with over 3,000 western-educated Ukrainians with a mission to serve as a civic platform for making the Ukrainian government the most effective in the world within the next 50 years and advancing good governance across the globe.

Since 2017, Artem has served as Head of the PGA Board, initiating and now leading the implementation of the Civil Service Feedback Loop Project, a first baseline study of the culture and practices of Ukraine’s civil service. The project is now being implemented in cooperation with the Cabinet of Ministers of Ukraine, Professor Francis Fukuyama’s Governance Project at Stanford University, and the Kyiv School of Economics.

Artem currently works as Legal Specialist and Task Leader on Legal Education Reform for the USAID New Justice Project in Ukraine. In this role, Artem is most proud of his contribution to conceiving, designing, and leading the implementation of an entrance exam for Master’s degree programmes in law, which is now required by the Government of Ukraine for admissions for graduate programmes at more than 130 law schools nationwide.  Since 2016, over 33,000 law school applicants have benefited from fair, merit-based, transparent and corruption-free admissions to law schools.

Reflecting on his Cambridge experience, Artem says, “The University empowered me with a global, growth mindset and a worldwide professional network; Cambridge taught me to dream big dreams, inculcated a sense of intellectual humbleness and amplified my thirst for knowledge, experimentation and learning. I express my deep gratitude for the Cambridge Trust's kind, generous investment in my education as well as the education of other young, talented people from all over the world”. 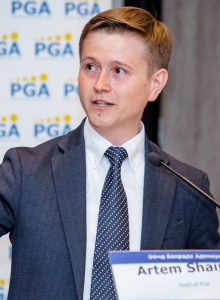