Constantinos attended the University of Cambridge between 1990 and 1993 and studied Natural Sciences.  After graduating from Cambridge, he attended University College London, where he studied for his PhD in Neurobiology on a Medical Research Council/Glaxo Scholarship.  In 1997, Constantinos was awarded a Wellcome Trust Prize post-doctoral fellowship and worked at the Department of Neurobiology of Harvard Medical School in Boston under Nobel Laureate Linda Buck.  His research interests included retinal development, cell death and the neurobiology of taste. Constantinos is a certified investment management analyst (CIMA®) and since 2002 has regularly served as an expert evaluator and reviewer for the European Commission.

Constantinos moved back to Cyprus in 1999, where he worked for a local financial services firm, qualifying with distinction as a member of the Cyprus Stock Exchange and became General Manager.  In 2001 he moved to the venture capital industry, first with the Bank of Cyprus Group, and then with the international private investment group of Emergo.

Now, as the Managing Director of Emergo Cyprus, he oversees investments in technology venture capital projects and is intimately involved in the process of sourcing, evaluating and transacting new investments.  Constantinos is responsible for the monitoring of the development and performance of a number of companies, currently focused on biotechnology.

As part of his role with Emergo, Constantinos held the position of VP, International Operations with US-based nutraceuticals company, Yasoo Health, where he managed the international launch of several products and executed distribution agreements for many European markets.  He also serves as the Managing Director of Bionature, a drug discovery start-up out of the University of Crete.

Constantinos is married to Marianna and has two children, Neo 11 and Irene 7.   In his spare time he is a keen triathlete and passionate about reading.

Of his time at Cambridge, Constantinos writes: “It was a very enjoyable time, with many hours spent heatedly discussing everything from politics to the primordial question of existence. I played for the College football team but I remember finding it difficult to adapt to the physical and direct nature of the English way of playing. The Cambridge Commonwealth scholarship was a fantastic privilege and opportunity, one that gave me great confidence and has helped me throughout my career.” 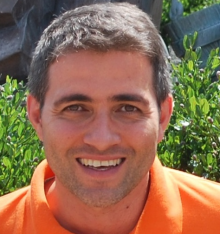