Giovanna grew up in Calera de Tango, a small town on the outskirts of Santiago in Chile.  She graduated with a Bachelor's degree and a Master's degree in Physics from Pontificia Universidad Católica de Chile

Whilst in Santiago, Giovanna joined the ATLAS collaboration, one of the main experiments designed to seek new phenomena at the Large Hadron Collider (LHC) at CERN, the European laboratory for nuclear and particle physics research.  In 2013, she was awarded a CONICYT-Chile Cambridge Trust scholarship to undertake a PhD in Physics at the Cavendish Laboratory at the University of Cambridge.

During her studies, Giovanna performed research in both theory and experiment.  After looking for new particles in the LHC data, she soon realised her passion for the field was in the theoretical side, and switched to a theoretical PhD in particle physics.  Her thesis explored how a supersymmetric universe (where fermionic and bosonic particles are deeply connected by symmetry) may look via colliders if the particles in the theory were long-lived, a feature which leads to a characteristic and novel decay signature in particle detectors.

While in Cambridge, Giovanna attended many schools and conferences, including a three week visit to the Galileo Galilei Institute for Theoretical Physics in Florence, Italy, supported by Newnham College.  She presented her research at the SUSY15 International Conference in Lake Tahoe, California, and engaged in several outreach activities as part of Cavendish Inspiring Women, a group based at the Cavendish Laboratory which helps to raise the visibility of women working in physics.  She was also editor and author of The First Book of Essays of Chileans in the UK, a project where proposals for the development of Chile are highlighted by Chilean students.

Giovanna's research interests have taken her around the world; she is currently a postdoctoral research fellow in particle physics phenomenology at the National Taiwan University in Taipei.

Writing about her academic experience, she says "... Science is a way of thinking when aiming to describe the Universe we live in.  For me, to come up with this understanding is also a social endeavour.  I have been very lucky; from my first visits at CERN, I was able to talk and learn from people from different backgrounds and cultures.  Cambridge was a dream place to grow as a scientist and as a person.  I knew when I was 15 years old, when my parents supported both me and my brother to take an English course in Cambridge, that I wanted to return to live and study in this wonderful city.  I was fortunate enough to have the opportunity of returning to study physics there.

Talking about her current work, she comments "I am really enjoying my time in Taiwan.  I am challenged every day, from reading a Chinese menu to writing a paper.  My experiences as a graduate student in Cambridge have given me the courage to both take and generate opportunities to keep undertaking and communicating the science I love." 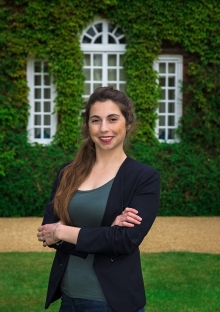