Before coming to Cambridge, Jing studied for a BA in chemistry at Peking University. He then worked for the Chinese Government for six years, when he was responsible for international negotiation and domestic policy making in World Trade Organization affairs. Jing was also engaged in a couple of Free Trade Agreement (FTA) negotiations between China and its trading partners responsible for Technical Barriers to Trade (TBT) section.

Jing received a China Chevening Cambridge Scholarship in 2011 which enabled him to study for an MPhil in Technology Policy at the Judge Business School.  After graduating in 2012 he returned to China and continued his career in AQSIQ, a ministerial level Government organisation in charge of product quality, food safety, entry and exit commodity inspection, quarantine and standardization.

During his time at Cambridge, Jing was a member of the Wolfson College football team as well as the basketball team.  He also travelled to Scotland, Northern Ireland and Wales and enjoyed many social activities that were held by the Foreign and Commonwealth Office which involved networking with the other Chevening Scholars. 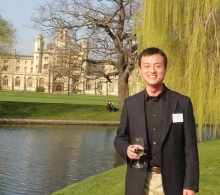