Nikhil studied for an MPhil in Technology Policy at the Judge Business School in Cambridge and was also a member of St Edmund’s College.  He was elected as Academic Affairs Officer and was a member of the Board for the Graduate Union for 2006-07.  Nikhil enjoyed studies, interaction with peers and staff but it was the 'Cambridge Experience' that he says changed his life

Nikhil Agarwal is currently President and Senior Partner at Cambridge Global Partners (CGP).  Prior to that, he was Professor of Management and founder Director of the Europe Asia Business School.  Nikhil has founded businesses and advised firms on strategic matters in the last 17 years of his career.  He has worked with global multinationals like Cadbury's, FIC and Zensar (RPG Group).  He has lectured at leading universities like Virginia Tech, Bradford, Edinburgh and Cambridge in a visiting capacity.  His interviews and work has been extensively covered in international media including HBR, Forbes, CNN Money, BBC Radio and The New York Times.  He has served on many international think-tanks; is serving an advisor to the United Nations Global Alliance on ICT & Development (UNGAID); is a board member at the World-Entrepreneurship-Forum and Open Mind Foundation respectively.  He was the first Asian to be elected as Co-Chair of the prestigious Internet Society Advisory Council (ISOC-AC) for 2008-10.

Speaking about Cambridge Nikhil says, "During my first few days of being at Cambridge, I was completely confused, didn't know what to do - study, party, or see the Colleges!  One of my tutors said to me, ‘Boy, just let yourself flow, don’t worry about too much". I still follow this advice at my workplace.

I feel nostalgic when I remember the formal dinners, music evenings and combination room chit-chat after a day's hard work.  The University of Cambridge has been providing life changing experiences to pupils for the past 800 years, and in a true sense will continue to do so in the coming hundreds of years.  I am proud to be a Cambridge graduate and equally thankful to the Cambridge Commonwealth Trust for awarding me an Overseas Student Bursary. 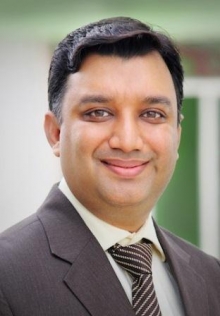