Riddhi Dasgupta earned his doctorate in International Law at Cambridge during 2008-2011. Whilst in Cambridge, Riddhi served as Vice President of his Middle Common Room, returning Officer and Debater at the Cambridge Union Society, and was the author of certiorari petitions and merits briefs on behalf of Texas inmates to the United States Supreme Court (as part of the Lawyers Without Borders, Cambridge - Texas Defender Service Coordinating Committee).

Riddhi currently spearheads The Wilberforce Society's project, relating to the drafting of a proposed Constitution of Tunisia in light of the Arab Spring.  The project uses comparative constitutional knowledge as well as grassroots Tunisian experience to devise an effective instrument. This endeavor started out as a uniquely Cambridge initiative and then spread worldwide.  It will formally be submitted to the Tunisian National Constituent Assembly.  Riddhi hopes to publish his PhD thesis as a book and commit full-time to the practice of law.

During his years in Cambridge, Riddhi conducted worldwide travel, improved himself in sports, and held photography exhibitions for charity. In all of this, he found the Cambridge community's support indispensable and unwavering, commenting “there simply is no better place on earth”.  Riddhi says about his time in there: "It was the best of times.  Cambridge might be a small town but its towering wisdom and the bustling activity it encourages should not be underestimated.  Cambridge is also a quiet place but it is the sort of quiet that gives people their voices.  I was surprised frankly about how much Cambridge taught my friends and me about ourselves.  That development was not just a result of longevity but in receiving a particular wisdom from the town and its’ people. Cambridge's relatively flat structure makes for significant cooperation from which my initiatives have definitely profited.  The support of Cambridge alumni, students and Fellows has been powerful.  It is the most compassionate and giving group of people I have ever come across, and for that I shall always be grateful." 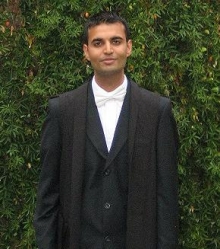