Robert completed his undergraduate degree in Chemical and Materials Engineering at the University of Auckland, New Zealand in 2011, where he was awarded the James Gordon Goodfellow Memorial Prize for the most distinguished performance in the Engineering cohort. It was during his undergraduate degree that his interests in Materials Science began, particularly as a field that combines and applies the physical sciences to create and understand the materials for next-generation technologies that are needed to enable a more energy-efficient and interconnected society. At the end of his degree, Robert taught the first-year Materials Science course during the University summer semester.

In early 2012, Robert began his PhD at the University of Cambridge, funded by the Cambridge-Rutherford Memorial Scholarship. He developed an atmospheric pressure spatial atomic layer deposition reactor, which grew oxide semiconductors two orders of magnitude faster than industry-standard methods. His work was awarded the Jackman prize for best thesis.

Subsequently, in early 2015, Robert was a Postdoctoral Research Associate at the Massachusetts Institute of Technology. Working in Professor Tonio Buonassisi’s group, he designed new bismuth-based semiconductors for photovoltaics. His work was awarded a patent and recognised by the US Department of Energy.

In 2016, Robert was the only awardee of the Thomas Nevile Junior Research Fellowship at Magdalene College, Cambridge. With this, Robert returned to Cambridge, working in the Optoelectronics Group in Cambridge on new materials for solar cells and lighting. His work was awarded the Young Engineer of the Year Prize by the Royal Academy of Engineering.

As of November 2018, Robert has taken up a position as Group Leader in the Department of Materials Science and Metallurgy, funded by the prestigious Royal Academy of Engineering Research Fellowship. His group will work on developing defect-tolerant semiconductors for photovoltaics, as well as new architectures that can overcome thermodynamic limits. He is taking on PhD students and is always interested in talking to Trust scholarship awardees.

Simultaneously, Robert is lecturing courses in the Materials Department, as well as tutoring second-year Materials students. He has also worked with the Royal Academy of Engineering on resources to enrich the school STEM curriculum and encourage more students to pursue Engineering as a career pathway.

Speaking about Cambridge, Robert said “The people and resources in Cambridge are among the best in the world, and it is a great privilege to be able to set up a group in this environment. The opportunity provided by the Trust to do my PhD here was key to the academic career pathway I have taken.” 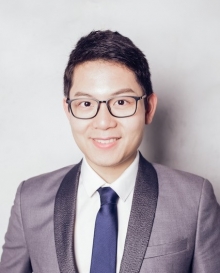