Rupak chose to come to the University of Cambridge in 2008 for his PhD in Pharmacology under the supervision of Dr Hendrik W van Veen, made possible by the funding he received from the Cambridge Commonwealth Trust.  For his PhD work at Cambridge Rupak received the Best Oral Presentation prize at the eSCAMPS symposium, the Best Poster prize at a Gordon Research Conference, the American Alumni Scholarship and Charter Studentship from St Edmund's College.  He has published three peer-reviewed papers and two research papers to leading journals.

Rupak took a postdoctoral position at The Scripps Research Institute in Dr Geoffrey Chang's laboratory in January 2012, where he is involved in two projects, the first being a US Air Force-funded project for engineering the substrate-specificity of drug transporters to enable them to secrete algal and microbial biofuels.  He was invited to speak at the Air Forces of Scientific Research (AFOSR) 2012 Annual Bioenergy Program Review Meeting at Arlington, VA in August 2012.  The second project is an NIH Eureka-funded project for the development of bench-top automated technology for the in vitro generation of high affinity binder scaffolds against any injected antigen of interest.

Rupak has an auxiliary interest in the neurosciences of thought and consciousness, and the intersection of science and religion, attending a course at the Faraday Institute of Science and Religion at St Edmund’s College.  He is also a semi-professional drummer and enjoys playing in rock bands. While at Cambridge, he was actively involved with the St. Edmund's College Music Society and performed at their open microphone evening and annual concerts.

Rupak says, “Cambridge offers the most intellectually stimulating place by far among the three continents I have lived and travelled in. The incredible density of brilliant minds, beautiful scenic streets, punts on the river Cam, historic College architecture and of course, the very many awesome pubs, makes for an unmatched recipe that has always and will continue to produce the best quality research and cutting-edge technology for this planet.” 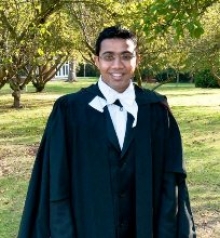