Sarah studied at Gonville and Caius College, Cambridge, between 2008-2010, gaining first an LLM and then an MPhil from the Departments of Law and Criminology respectively.

Sarah embraced all aspects of Cambridge life, playing violin in the Cambridge University Chamber Orchestra, with which she toured Italy in 2009, joining the College lacrosse, squash and rowing teams, actively participating in the College chapel, and embracing all the social and academic opportunities on offer.

After graduating, Sarah returned to South Africa where she undertook pupillage to qualify as an advocate at the Durban Bar, with a particular interest in the constitutional and human rights issues surrounding the many socio-economic challenges in South Africa. 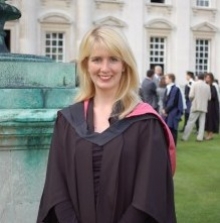