Tanjina studied in Cambridge between 2011 and 2012 where she completed a Master of Law degree (LL.M.) specializing in corporate and commercial law. During her time in Cambridge, Tanjina was a member of Newnham College MCR and the Bangladesh Society in Cambridge.

Tanjina is now going through the mandatory pupilage training to be enrolled as an advocate in Bangladesh.  As a trainee lawyer, she is observing court proceedings, preparing draft petitions and is involved in legal research in various areas of law.

In her free time, Tanjina is making plans to undertake a PhD, studying carefully her topics of interest in order to decide on a good research proposal.

Writing about Cambridge, Tanjina says, “It was a wonderful opportunity to study at the University of Cambridge. The course structure of LLM was demanding which I believe helped a lot to bring out the best in me.  Newnham College MCR helped students to socialize and become involved in different activities.  Back home, a Cambridge degree is helping me to be recognized positively almost everywhere.  I miss both the excellent academic environment of Cambridge and my friends there”. 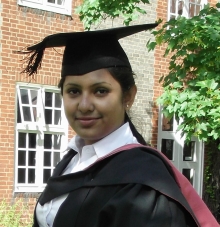