Before beginning his PhD in Politics and International Studies at Cambridge, Teale completed two undergraduate degrees in Political Sciences (honours) and International Relations at the University of Calgary in Canada.  In Canada he was heavily involved in politics, beginning in student politics at the University of Calgary and then moving into federal and provincial politics.  He was active with many local community and environmental groups campaigning on local and provincial environmental issues as well as healthcare, social justice and the promotion of the arts. He regularly volunteered with William Roper Hull Child and Family Services and the Canadian Parks and Wilderness Society (CPAWS).

Teale’s research has taken him to strange places; he completed four months of fieldwork in the Southern Ocean, Antarctica and attended the International Whaling Commission (IWC) meeting in Jersey. He has presented research papers at numerous international conferences and has several publications.

Teale currently serves as an associate editor of the Cambridge Review of International Affairs, a quarterly academic journal. As a member of the fourth place Cambridge International Studies Association Wikistrat Grand Strategy Competition, Teale was offered a position as an analyst with Wikistrat, an online Massively Multiplayer Online Consultancy (MMOC), which examines political and geopolitical trends.

Teale is an avid conservationist and currently volunteers with the Transition Cambridge Growing Spaces Project,  Cambridge Carbon Footprint, and some local political campaigns. He is very excited to be a volunteer Games Maker for the 2012 London Summer Olympics.

Teale says: “Cambridge is an amazing place to study. College life is exciting, the city is beautiful, and there are an overwhelming number of things to do and see.  I am incredibly lucky to have had the opportunity to conduct my research here; I have met an incredible number of friendly, interesting and engaging people here.  I am very thankful for the support of my Commonwealth Scholarship as it has made all of this possible and allowed me to travel to the far reaches of the planet to study something about which I am passionate. 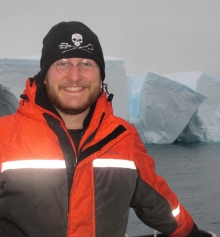