Current position: PhD student in Chemistry at the University of Cambridge

Terence began his studies in 2008 for a BA and MSci in Natural Sciences, Chemistry at the University of Cambridge.  During this time he has won several academic awards including the Rawlins Prize (2011), Wilfred Wilde Scholarship (2011), Newton Prize (2012) and 1912 Scholarship (2012) from Fitzwilliam College.

Having identified a clear interest in Organic Chemistry, Terence applied to undertake a PhD at Cambridge under the supervision of Dr David Spring to focus his studies on diversity-oriented synthesis (DOS), and was awarded the Croucher Cambridge International Scholarship for his studies.  His current research aims to design a DOS programme to generate a diverse library of heteroaromatic compounds and to screen them against protein-protein interaction targets.

Terence is actively involved in student life through sports, captaining the Fitzwilliam Badminton Team (2010-2011) and rowing in the Fitzwilliam College Boat Club 1st VIII (2011-12).  He also has a keen interest in music, and holds a Diploma in Piano Performance awarded by the Associated Board of the Royal Schools of Music.

When asked how he benefited from his time in Cambridge, Terence said, “I am forever indebted to Cambridge for providing the numerous opportunities and life experiences.  The stimulating research environment Cambridge offers has developed my scientific interest and I look forward to working with my supervisor and other scientists during my Ph.D. studies.  I thank the Cambridge Overseas Trust for their continued support throughout my time here in Cambridge.” 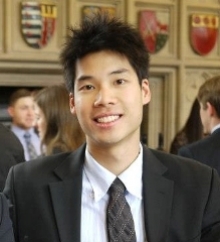